Learning how to install motion sensor light switch is a valuable skill if you wish to upgrade from manual to automatic switching. Of course, a handyperson could do it for you, but the satisfaction of doing it yourself may be rewarding.

Let’s explore the basics of motion light switches and other important topics about them.

Before discussing how to install motion sensor light switch, it’s important to learn about the types and their characteristics.

An occupancy light switch turns on the light when someone enters the room and automatically turns off after a certain length of time.

When used appropriately, it may be a cost-effective solution for reducing the time which the light is in use. Other benefits such as reduced energy usage by about 50% and lowered peak demand are achievable.

While it is preferable on paper, there are a few things you should think about before considering this type of sensor. Occupancy sensors are recommended in areas that are frequently unattended, such as warehouses, conference rooms, hallways, and restrooms.

This technology is not appropriate for places with high foot traffic, such as lobbies, operational areas, and pantries.

When a person arrives, vacancy light switches do not turn on the light, forcing them to turn it on manually. It will monitor and switch off the lights if the space is left unoccupied for an extended period.

In a nutshell, when a room is empty, this sensor shuts off the lights, but you must switch it on.

Although a vacancy sensor switch can be less convenient than the occupancy type, it saves more energy. Someone may not require artificial light in a room during certain situations, like when sunlight is sufficient.

How To Install Motion Sensor Light Switch: The Steps

Installing electrical equipment might be challenging and dangerous if you do not have prior experience or assistance from a professional. However, installing a light switch shouldn’t be too much to accomplish, provided you follow the steps below.

1. Check if the Light Is Compatible

Some lights produce more heat, which has a long-term effect on motion sensors. As such, before you install a motion sensor switch, you must first understand how various lights interact or interfere with motion detection.

2. Turn Off the Power

Like installing any other piece of domestic electrical equipment, it’s essential to turn off the power at the circuit breaker. To avoid the risk of electrocution, this step is pretty much mandatory.

Tap one lead of your voltage tester on the ground wire to confirm no live energy is going through the wires. You also have to test the other lead by connecting it to the hot and neutral wires.

The electricity is still on if the voltage tester lights up in either situation. If that happens, turn off the appropriate circuit at the main panel until you confirm that the electricity is not active. 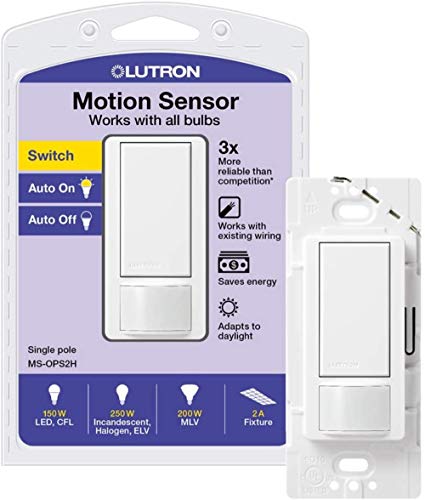 Before you start disassembling your existing switch, it’s essential to learn about the three wires you’ll be encountering for this task.

Usually, modern switches are designed with screw terminals on both sides and holes on the back to accommodate the wire’s end. With a regular screwdriver, removing the screws should be fairly simple.

However, pulling the wires out of the rear of the switch may be challenging. Insert the blade of a small-sized screwdriver into the slot underneath the hole where the wire is mounted.

Push the tip on the screw in the hole while you’re pulling the wire loose. This action makes the slot release its grip on the wire.

Remove the old bare ends and peel off the insulation to have “fresh” wires for your new connections.

Most motion sensor switches can fit a standard single-pole wall switch setup. As you might expect, specific wiring layouts differ depending on the model.

Some switches have a neutral wire attached to power the LED. Others do not since they do not need a connection to the neutral circuit.

You may attach the wires on the new switch in the same manner as the old one is connected. To verify that you connect the switch correctly, see the wiring diagram that came with your switch model.

Before mounting the switch plate cover, read the motion-sensor programming instructions to learn about customizing the device.

Before you pack up your tools, adjust the sensitivity and other settings to check that everything is in working order. If everything goes as planned, installing a motion light sensor switch should only take 15 to 20 minutes.

While learning how to install a motion detector switch is useful, knowing how it works could be beneficial.

A motion sensor light switch is designed with a motion detector unit. When movement is detected, the light will activate or deactivate depending on whether you have an occupancy or vacancy type.

For movement detection, motion sensors use various motion-detecting technologies, each with its set of benefits and drawbacks. Three types of technology are typically utilized: PIR, ultrasonic, and dual technology.

The most popular type of occupancy sensor in the market today is a PIR sensor. A light sensor switch with this detection unit recognizes changes in infrared levels.

If there is a difference in the heat received by the slots, the sensor recognizes a moving item and switches on the light.

Certain PIR sensors have an operational range of about 35 feet in particular directions. However, because this type only receives signals, it is primarily effective within a 15-foot range. The blind spots become greater with distance.

This type of sensor utilizes ultrasonic high-frequency signals. It measures the frequency of the returned signal and interprets any changes to the ambient frequency as motion.

Since ultrasonic motion sensors recognize motion primarily through sounds, they cannot distinguish between who or what moves. Any movement in the area where the sensor is installed may trigger the ultrasonic sensor to activate the light. As such, it will activate the lights even if a human does not make the motion.

Ultrasonic sensors are typically more sensitive and are capable of monitoring more extensive areas than PIRs since they are active. They are, however, more susceptible to erroneous triggering.

Air motion, caused by someone sprinting or a cycling ventilator, might turn on the light. To address the issue of false triggering, some models allow you to customize the sensitivity.

Also, to prevent incompatibilities with equipment such as hearing aids, the waves’ frequency usually is much above what the average ear can catch.

As the name suggests, a dual-tech switch combines PIR and ultrasonic technologies to deliver better service.

The basic way to explain its functionality is that the lights will activate when both technologies identify an individual’s presence. With the built-in ultrasonic sensor does not have to send out signals continually, a dual-tech sensor could cut off the power consumption.

It also helps to avoid false triggering since the motion needs recognition by both sensors. As long as the PIR or ultrasonic sensor detects motion, this type will “assume” there are still people there.

This functionality will keep the light on until the individual or all people leave the area. Overall, dual-tech motion sensors appear to have merged the benefits of both technologies while minimizing the drawbacks of PIR and ultrasonic switches.

While it may seem complicated, installing a motion sensor light switch can be a simple task. With proper tools, safety precautions, and following instructions provided by the manufacturer, even an amateur can do it. After completing the task, you can now enjoy the convenience of automatic switching and less energy consumption.