Security cameras are made to provide surveillance that allows you to feel safer, especially when you’re away. It’s common to assume that those who want to learn how to disable security cameras have malicious or criminal intent.

However, knowing how to accomplish this task can also be beneficial for ethical reasons, such as keeping your neighbor from spying on your house. You might also learn how to protect your security cameras better if you know how to disable them.

With that in mind, let’s discuss the methods you can use and other related subjects.

Seven Methods on How To Disable Security Cameras

If you do not want your neighbor recording the activities in your house, you must know how to disable their security cameras. Unless you’re into illegal activities, privacy should never be taken for granted.

With that in mind, let’s identify some effective ways you may consider for making security cameras unable to capture video data.

An infrared laser is one of the commonly-used items for hampering a security camera’s ability to capture video footage. The sensor will get compromised by aiming a powerful laser pointer at the security camera’s lens for a couple of minutes.

The challenge of using this method is that you need to be significantly accurate. If your hands become shaky and the pointer is not consistently directed at the lens for even a fraction of a second, the camera will record you.

To minimize this issue, you must operate fast with precision. You can use a laser pointer any time, but it is more recommended when there’s scarce or unavailable natural light. Remember that the brighter the laser, the more effective it becomes in blinding the camera.

An infrared laser is detrimental not only to cameras but also to the eyes. You can shield your eyesight by wearing dark glasses, but don’t assume that they provide complete protection.

A bright LED flashlight may disrupt a security camera without recording the person using it. This method is only feasible at night, as sunlight will effectively neutralize the intensity of the light beam.

Like with the infrared laser pointer, aiming the light at the lens should do the trick. The difference is since the flashlight emits a significantly larger beam, pointing it at the camera lens should be easier.

If you are successful, you should get a lens flare that hampers the recording while making it harder to identify who is holding the flashlight.

Be aware that this approach is not very subtle since the abrupt flash may alert anybody around to the security camera. If the beam is not pointed at the lens, it will normally capture the field of view.

If you want a more passive and discreet approach to disabling or limiting a neighbor’s video recording capabilities, replace your dim outdoor lights with a much brighter model.

As you might have guessed, a floodlight can disrupt security cameras in the same manner as a laser pointer and LED flashlight can. If a bright light gets captured by the lens, the camera’s focus is mainly concentrated on it.

You may take advantage of this by putting floodlights in the areas where the cameras are facing. Like with LED flashlights, it works best during nighttime.

At this period, your neighbor’s cameras will have a hard time recording, allowing you to enjoy your privacy. It could be less effective than the first two methods, but at least you won’t get accused of doing something malicious by other neighbors. 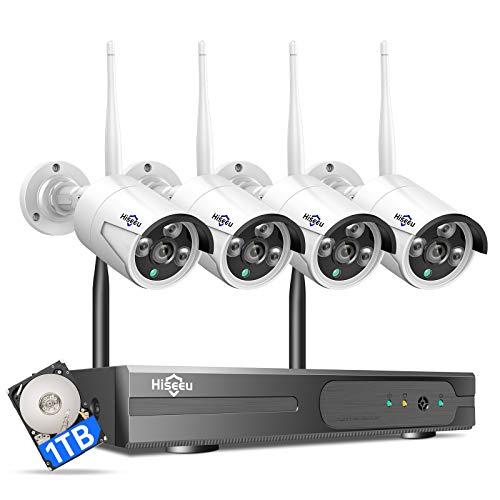 Any security camera’s wireless signal is prone to jamming if it is dominated on the same frequency by a stronger signal. For wired cameras, jamming is possible when the wire is tampered with.

In most circumstances, using a signal jammer is forbidden, so if you insist on utilizing it, speak with the authorities or a lawyer first. If you’re confident about using this device, there are available products online that promise disruption on wireless security cameras.

While it may not completely disable the device’s capability to record, it may severely affect its ability to capture clearly. Keep in mind that other nearby electronic devices are also prone to malfunction when using a signal jammer. For example, your phone may not connect to the network, which means you won’t be able to do much with it.

Major professionally monitored security systems and cameras from renowned companies such as Google Nest and Wyze feature advanced encryption in their products. This implies that as long as the app and camera’s firmware are up to date, hacking its software as a means to disable its functions should be extremely difficult.

However, there have been cases where hackers have successfully disabled security cameras. Hacking is by far the most difficult approach to accomplish because it requires some specialized equipment, software expertise, and a little bit of luck.

If you do this, you could be in trouble because it is a major security and privacy breach for the camera’s owner.

Despite the fact that many security cameras have Wi-Fi connectivity and are battery-powered, most models are dependent on cables to function. If you have access to the camera wires, you may simply detach the power or signal by cutting them.

Like hacking and using a signal jammer, disconnecting the security camera wires by any means is a malicious act. As such, you’ll have to answer to authorities when the owner of the camera reports you.

If you want a sure-fire method, you can simply cover the camera to disable its ability to see and record. Any tape will effectively cover the lens, as long as it is not transparent. You may also use a towel, plastic bag, or newspaper, but you need an adhesive to ensure that it will stay in place.

The risk of you getting recorded on the act of covering the camera is high since you need to be close to accomplish it.

Unless the issue is about your privacy, you shouldn’t practice the methods on how to disable security cameras. More often than not, they provide surveillance as a means to discourage criminal acts, monitor kids, and other notable benefits. Still, knowing the limitations of security cameras can be helpful if you want to secure them better.