If you’re always on the road but want to keep your home secure, it’s worth installing a smart lock compared to the classic deadbolt. This gadget can manage entry into your house without your presence, inform you who is coming and departing from anywhere, and other convenient features.

Schlage is a well-known brand when it comes to smart locks. When you choose this brand, one of the most commonly-asked questions is how to change code on Schlage door locks. We’ll answer that inquiry and discuss some related topics.

Walter Reinhold Schlage, a German-born inventor engineer, got his start by creating the bored cylindrical lock. He opened the first Schlage shop 11 years after filing the patent for his invention.

Schlage has built a reputation for making high-quality products by both industry professionals and consumers. After decades of operations, Schlage was acquired by Ingersoll Rand, a successful manufacturer of industrial equipment, in 1974.

In 2013, the company became a member of the Allegion Group.

Besides being the recipient of the CES 2016 Innovation Award, the brand has been praised by Bloomberg, Forbes, TIME, and other media outlets.

In 2012, it introduced Nexia Home Intelligence, which allows you to integrate wireless door locks to the internet and manage its functionalities via a smartphone.

How To Change Code on Schlage Door Locks

Schlage’s most notable keyless locksets feature a keypad that opens the door once you push keys to enter a four-digit code that you pre-programmed into the device. These locksets can usually store up to 19 different codes, making it simple to generate temporary codes.

Your guests, babysitters, service providers, and others individuals that need short-term access are the ones who require these codes. At any moment, these codes can be activated or disabled at the owner’s discretion.

If you’ve recently moved into a new home with this type of security, you have to know how to change code on Schlage door locks. Fortunately, even though Schlage keyless products have different designs, the password interface has a consistent configuration approach.

To gain access, users must enter at least four numbers and yank the handle or rotate the doorknob. If you feel that the password of your Schlage door lock is compromised, changing it as soon as possible should be a priority.

The default programming code of a Schlage lock is usually on a label on the guide that comes with the original packaging. If you don’t have access to the programming guide, take the lock off the door and check the back for the default code.

If the programming code is altered and you’re unsure what it is, resetting the Schlage lock to its default code is possible.

We’ll cover how to factory reset a Schlage lock later.

It generally functions the same way, whether you have a Schlage lock with a manual or touchscreen keypad. Enter the corresponding programming code and see if the Schlage button will flash orange three times and beep three times.

The button will continue to light up, indicating that it is currently in reprogramming mode. After that, you may program a new access code into your Schlage lock.

When you’re ready, push the Schlage button, followed by the number 1 keypad button. Ensure that you are doing this step in quick succession.

The Schlage button will flash and beep thrice if you have done it correctly. After that, enter a four up to eight-digit access code.

Like the password suggestions on online accounts, the greater the number of digits in the access code, the better your security. Opting for an eight-digit access code is highly suggested since it would be more challenging to guess.

However, the traditional four-digit access code is still worth considering if you think inputting eight digits every time is cumbersome.

The Schlage button will flash and beep three times more before re-entering the new access code. It will emit a lengthy beep and a green light to indicate that you’ve successfully programmed a new access code.

At this point, you have completed the process of changing the access code on a Schlage door. 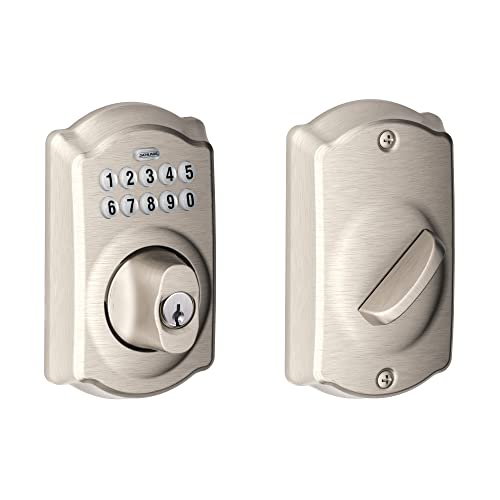 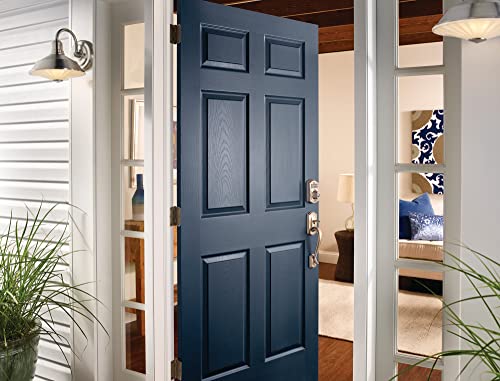 How To Delete an Access Code on a Schlage Door

After you learn how to change code on Schlage door locks, it’s also equally important to be aware of deleting access codes.

To erase an access code, push the Schlage button, then the six-digit programming code, and then the number 2. After that, you need to enter twice the code you intend to remove.

Once successful, you will receive a blinking green light and a couple of beeps.

You can also erase a user code from your smartphone. Tap the pointer to the right of the Schlage lock’s user codes. Select the user code you wish to remove.

Using the smartphone to update user access is more straightforward than manually doing so.

If you want to remove all existing access codes at once, it’s possible.

Like erasing an access code, push the Schlage button and enter the programming code. This time, instead of pressing 2, select the number 6.

Then, you have to type the programming code again. At this point, since there are no existing access codes, unlocking your door with a code is disabled.

That’s why after wiping out all the access codes, creating a new one is highly recommended.

How To Factory Reset the Schlage Lock

As previously stated, your Schlage Lock Programming Code is located on the user manual or the white sticker behind the keypad assembly. Restoring factory settings will wipe the present programming code and reset it to default.

Before reinstalling the lock, write down the original six-digit Programming Code and the two default user codes. Lift the battery cover from your lock’s inner structure and remove the battery.

Make sure you accomplish this step within 10 seconds because you have to repeat the whole process if done incorrectly. If you successfully factory reset your Schlage lock, the lost Programming Code will no longer be an issue.

As a result, you may now program your lock with the original programming code. Following that, you’ll need to reprogram everything since the factory reset has wiped out all previous settings.

You need to update your Schlage door lock’s programming code for security reasons.

Input your Schlage lock’s original code and wait for three consecutive beeps and the button to flash three orange lights. After that, tap the Schlage button and press 3. Wait for it to glow three orange lights; again, the lock will beep three times.

You will type in a new six-digit programming code. Write the new code on a piece of paper or save it on your phone.

Wait for the button to flash orange three times and the three beeps that follow. Once successful, you have to re-enter your new programming code.

After you’re done, the Schlage button will flash green, and the lock will emit one lengthy beep. The green light and beep indicate that the programming code is updated accordingly.

Successfully Updating Schlage Lock on Your Own

Updating access codes or resetting your Schlage lock is simpler if you follow these steps. You can easily manage the access and programming codes without professional assistance with some knowledge and patience.