Security cameras are an effective device commonly utilized for implementing security and protection. Their popularity has grown significantly over time, as more consumers now treat it as a necessity more than ever.

Many cameras are designed to work in residential and commercial premises and are applicable for indoor and outdoor monitoring. Many modern security camera models are wireless, which requires a connection to a local network.

Usually, wireless security cameras are easier to install and provide more positioning options. Given these advantages, the question “Do security cameras need WiFi?” has become a relevant topic.

When security cameras became a common commodity, they were designed to require a connected electricity supply to function.

Some camera systems continue to function in this manner. These connected cameras transfer video feeds to a device with a display, such as a computer monitor or television.

On the other hand, the video captured by a wireless security camera gets transmitted via the internet or another wireless network. Typically, video recordings are stored on a PC’s hard drive or cloud storage that allows viewing later.

A wireless camera needs a signal and a stable connection to your local network to capture and record footage. The short answer to “Do security cameras need WiFi?” is yes, especially if you have a wireless model that provides a live feed to smart devices.

Most Popular Types Of Security Cameras

To further understand their features, let’s explore the different types of security cameras to highlight their design, capabilities, and advantages.

Before the rise of wireless cameras, wired security cameras used to be the standard iteration you’ll see on most homes and establishments. These cameras include two primary wires, one for electricity and another for connection to a recording device, usually a DVR.

Some cameras are designed to monitor via landline, but they usually require a professional to install them.

Before, these cameras recorded footage on a tape or CD, but recently, they have memory SD card slots to make it more convenient. Since wired cameras have the advantage of never needing batteries, you won’t have to worry about their source of power getting depleted.

However, the disadvantages can be significant. Since they require wired connections, it needs more tools and assistance to install.

In case of a power outage, the camera has no means to operate, which will cripple your home security. This type does not require a WiFi connection since they do not require network connectivity to record.

Wireless cameras are essentially the smartphone version of the wired type because they offer more versatility like power and storage options.

Contrary to what their name implies, these cameras usually require a physical wire, an adapter, that establishes the connection to a power source. Some models are built with a battery in case of an outage or entirely powered by it.

Wireless cameras often save their footage to a cloud server, allowing easy access from any location with an internet connection. Many models have memory card slots that enable offline recording of video data.

They’re popular because anyone who uses a smartphone or computer can figure out and install without professional help.

Wireless security cameras equipped with motion sensor record whenever they recognize motion or sound. Still, they are also capable of recording all the time.

Higher-end models record with HD quality and can still capture video data at night. Newer releases usually have two-way audio capabilities, allowing you to verbally communicate with the people who are in the camera’s field of view.

Furthermore, many wireless cameras are programmed to send push notifications, which alerts the homeowners whenever there’s movement or person on your property.

Dome security cameras are a popular type because of their shape and features. Although dome cameras are usually for indoors, many models have a weather-resistant design made for the outdoors.

Since it is commonly used indoors in shops and workplaces, most people are very familiar with this camera style. Besides their shape, many prefer them because they typically provide a broader field of view.

Since the dome camera is enclosed, it is protected from dust and other types of debris. As such, it is an excellent choice for a messy workplace, like in a kitchen or a warehouse. Many models include heat detection, motion sensor, and night vision, in addition to the weatherproof feature.

The camera’s IR illuminators work better for bullet cameras because there is no visual distortion caused by IR LED emitters’ reflection on the glass. Intended for outdoor use, this type is typically weather-resistant and has a greater range.

You can bullet cameras on parking lots, warehouses, parks, and other large places. Many models provide an angle of view that can reach up to 80 degrees. 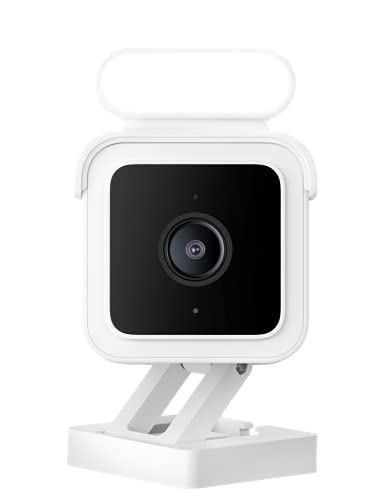 A c-mount camera has a removable lens, which allows you to upgrade it to match different purposes. With the capacity to operate high-quality lenses, it can cover distances greater than 40 feet.

On the other hand, a conventional security camera covers between 35 to 40 feet only.

C-mount cameras, like bullet cameras, are often large and serve as a visual deterrent to possible intruders. They’re recommended for viewing the street or road on the way to your property.

In the manufacturing and logistics work areas, it’s common to see c-mount cameras at the entrance gate. With its dependability at severe temperatures, those working in the food and industrial industries are most likely familiar with this type of security camera.

While many cameras have a wide field of vision, the limitation of having a single angle might be a deterrent to monitoring a place thoroughly. To address this issue, the PTZ camera has mechanical controls that allow operators to pan, tilt, and zoom the camera remotely.

Via the camera software, a remote operator may modify the direction anytime. PTZ cameras are customizable and capable of running patterns or automatically turning to a certain point.

This camera is convenient for surveying an extensive facility remotely, like in a factory, airport, command center, and others.

As you might expect, PTZ cameras are more expensive due to the ingenuity of their functions. So, unless you are monitoring a large area of operations, you’re better off choosing other means of surveillance.

A hidden surveillance camera is the number one option for monitoring a specific area covertly. This type of camera resembles smoke detectors, fire sprinklers, alarm clocks, and other inconspicuous things.

If you opt for a hidden surveillance camera, the goal is to put it in a spot where no one would notice. Like other security cameras, it can continuously capture video or utilize motion sensor technology that activates recording when someone or something moves.

The answer to “Do security cameras need WiFi?” mostly depends on the type you’re using. However, if you don’t have reliable WiFi connectivity, these surveillance cameras below are worth considering.

One of the most prevalent monitoring and security devices is HD-over-Coax. Its wires provide video, audio, and data at the same time via a single cable.

This setup makes installation and repairs easier than other security cameras. Since the signals are analog, HD-over-Coax is significantly more challenging to hack or tamper with than a WiFi-powered camera.

CCTV, or Closed-Circuit Television, is a network of surveillance cameras and recording devices connected to each other.

“Closed-circuit” refers to the setup that the whole network is separated and functions independently. While it lacks the bells and whistles of modern security cameras, it remains a reliable means of monitoring a specific area.

A CCTV does not require a WiFi connection to function because it runs on its network.

Why Consider Cameras Without WiFi

Regardless of which surveillance camera without WiFi you choose, you’re bound to reap some benefits, besides the fact that it’s more secure against hacking.

First, WiFi security cameras may not be the best choice if you’re concerned about your property’s internet data consumption. To record and save footage, they rely on your internet’s network.

This may not have a significant impact if you have a single camera. However, it could mount up to several gigabytes of data each month if you have multiple cameras installed.

In relation to internet usage, opting for cloud storage may also result in having monthly fees. The reliability of a WiFi being stable is not always optimal as there’s always the instance where the connection quality fluctuates.

When this happens, the camera’s ability to record and function may be in jeopardy.

Modern security cameras are usually built with internet connectivity, enabling remote access. While this feature is convenient, not all areas have a stable wireless connection. As such, security cameras without WiFi are still a viable option for many property owners.